In the late 1990’s when my grand kids were small, I wrote a story for them about two rabbits titled “Biff and Becka Go to Town,” and they enjoyed it.  I tucked those few typed pages away and forgot about them.  In the fall of 2010, I was to meet my friend Jane for lunch, and I wanted to give her something as a token of our friendship.  The thought came to give her a copy of that story for her grandchildren.  She loved it, and declared I had to write more.  I acquiesced, and it turned into an eight-chapter, sixty-six page book I titled Biff and Becka’s Springtime Adventures. 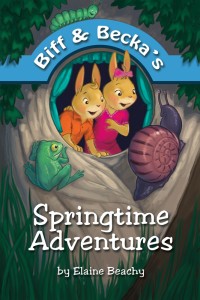 After contacting a few publishers, I decided to go with assisted self-publishing, did research online, and decided Wine Press Publishing looked good.  So I began the submission process, and it stretched me considerably—mentally and financially.  Springtime Adventures was finally published in 2012, and I had a website address elaineandfriends.com, hosted by Wine Press.  I worked hard to produce a nineteen page activity packet for kids on that website, plus many other features.  It was a long and arduous task.

I began work immediately on the second book, Biff and Becka’s Stupendous Vacation, and for a number of reasons, chose to change publishers. * I had it published by WestBow Press in 2013, and had a website with them at elainewrites4kids.com because it was part of that publishing package.  Then I started work on the third and final book in the trilogy.  Little did I know that my game plan was about to change. 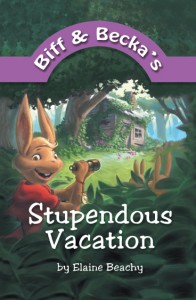 In January of 2014 I learned that Wine Press Publishing was out of business, so I was left with no way to purchase any more of those books.  I was really upset.  It meant I had to have the book republished.  But there was a silver lining behind the cloud.  I would have WestBow Press republish that first book, so I’d have a matched set done by one publisher instead of two.  And also, I could have my illustrator re-design a cover to represent the correct age for which my books were written: age seven to eleven.  (Because of inexperience, miscommunication and other factors, the beautiful cover for Springtime Adventures had looked like it would be for kids four to five years of age.)  I immediately saved all the information from my elaineandfriends.com website onto my computer, so I wouldn’t lose it, and could access it later.  I was glad I acted quickly! 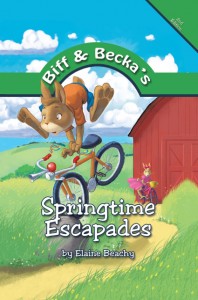 I changed the name from Springtime Adventures to Biff and Becka’s Springtime Escapades, wrote two more chapters which made the page count one hundred fifteen, had David Miles design a new cover, bought another publishing package from WestBow, and started over. * Since the Escapades publishing package also included a website, I decided to transfer all the website info I had saved onto my new current website ElaineBeachy.com.  I let the other website expire.  I was glad to finally have all my books under one “roof!”

During the middle of all this, I attended writing conferences and became a member of the Northern Virginia Christian Writer’s Fellowship for monthly meetings.  I also started writing a blog in October of 2011 and kept it up; it will soon be four years.  I also had a facebook author fan page.  Everything really stretched me, but I am thankful my husband has been so supportive, and our oldest son has given me invaluable computer help.  I did a lot of praying as I wrote, and the Lord was faithful to help me with everything.

My third and final book, Biff and Becka’s Splendiferous Christmas will be out sometime in September of this year (2015).  You’ll be the first to know!